Some people impact your perspective of the world more than you realize. For me, one of the voices that shaped my understanding of female identity in college was Eve Ensler. Her piece The Vagina Monologues demonstrated in a palpable way that it’s still a radical act for women to tell their stories in a public forum. As it did for many in my generation, the Monologues finally turned my understanding of gender equality on its head. 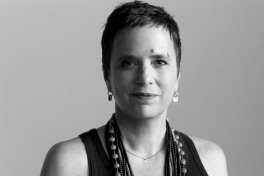 Last week Eve Ensler came to Berlin, where she gave a talk and reading for free at Soho House, which was organized by incredible team at Dialogue Books. She read from her newest book, In the Body of the World, which really shows her artistic (and activist) progression since the Vagina Monologues. Ensler also spoke on the founding of V-Day, a day to end violence against women, which has expanded into a global movement.

Ensler explained how the Vagina Monologues started. She had written the piece “The Flood” about a seventy-year-old woman who didn’t have sex for her entire adult life after being shamed as a teen. She read the story at an open mic night, where other writers encouraged her: “you have to do this vagina thing!”. After the Monologues opened in New York, Eve experienced a veritable flood of women coming up to her and wanting to share their own stories of abuse, repression and strained relationships with their bodies. It was as if “whatever they had heard had uncorked their stories,” which they desperately needed to share.

After the Monologues ran for a year or two, it became clear to Ensler that something had to be done to “combat this epidemic” of violence against women. That’s why she started V-Day on February 14, 1998, as a day of activism to break this cycle. Since then, the initiative has grown into a global movement: active in over 167 countries, Ensler’s nonprofit has raised over 100 million dollars. This money has helped to open the first shelters for women in Egypt and Iraq, sponsor annual workshops and donate satellite-phones to women in Afghanistan. It was also instrumental in the founding of Karama, a program in the Middle East and North Africa the works to end violence against women by collaborating with local women’s organizations and other advocacy groups.

But that still doesn’t explain how she came to write her new book. As Eve sees it, the intense emotional strain of hearing story after story from women all around the world – which pinnacled in the Congo, where she met women who talked about their experiences with the rape and violence being used as a systematic weapon in the country’s ongoing civil war – impacted not only her emotional, but also her physical well-being. When she was diagnosed with uterine cancer, she had to put everything else on hold, and turn inwards.

Cancer threw me through the window of my disassociation into the center of my body’s crisis. The Congo threw me deep into the crisis of the world, and these two experiences merged as I faced the disease and what I felt like was the beginning of the end. (In the Body of the World, p. 7)

The irony is that after spending so many years standing up for the female body, until her illness Eve had felt disassociated from her own body due to the sexual abuse she experienced as a child. The process of undergoing cancer treatment, in which her body was “pricked, punctured, probed and scanned,” she became “all body.” This experience transformed how she views the world; she now connects the personal with the universal, the body with the environment, and what she terms as the global assault against women with the systematic exploitation of the Earth.

That’s how Eve sees the world – as interconnected, and everyone is dependent on everyone (and everything) else. Although the above passage might seem negative, it’s hard to express the strength and energy that radiates from Eve. She talked about the power of dance to heal, in particular to heal people’s traumatized relationships to their bodies. The newest incarnation of V-Day, One Billion Rising, mobilized women in 167 countries to come together and dance – not only to protest, but to demonstrate the power women truly have when they stand up for each other and themselves.

Here are a few stray lines and thoughts that stood out to me during the evening. For instance, on chemotherapy: with the help of her therapist, Eve was able to visualize the chemo as an empathetic warrior that “burned away” the negative – in her past and in her traumas. She talked about how undergoing chemo puts you in an extremely sensitive state of being; she’s in conversation with doctors about how to leverage things like visualization in this state to help patients steer the effects of the chemo and overcome cancer. Or on setting an example: No one is telling the truth (about what has happened to them) – you have to stand up and be a leader. This creates a chain reaction and empowers others to stand up and do the same. Everyone is interconnected – those in power have a stake in maintaining this illusion of separateness, otherwise we would rebel. On that same note, “start defying authority, trust what you know to be right” – and act on that knowledge. During One Billion Rising 2013, women in Mogadishu also rose up and organized the first dance protest ever. Since then, the first rape cases have been prosecuted in the country.